Public Mint has identified some of the core issues that needed to be addressed in the crypto ecosystem, and is making it easier for people to bridge the gap between crypto and fiat system.

The cryptocurrency and blockchain ecosystem are some of the most rapidly growing industries in the tech sectors as companies, individuals, and other entities realize the benefits of decentralized, borderless, secure, and censorship-resistant systems and currencies.

The current cryptocurrency ecosystem is a far cry from the one started by Bitcoin back in 2008 when it was limited to crypto-anarchists and other underground digital tribes that saw them as a tool to defy governments and enterprise while ignoring the true potential of the technology.

With the total market capitalization of cryptocurrencies being worth over $1.5 trillion and new use cases emerging by the day, the time seems right for the masses to adopt cryptocurrency to facilitate their financial transactions and improve their platforms through blockchain technology.

However, the ecosystem still has multiple challenges that need to be addressed before mass adoption is a real possibility under the current financial needs of people and institutions around the world, with high levels of volatility being one of the main concerns.

The high volatility of cryptocurrencies that allowed them to gain popularity among investors up to this point has also resulted in one of the main arguments of crypto skeptics who warn those unfamiliar with the technology about the risks of purchasing and holding cryptocurrency.

This also represents a liability for institutions looking to use crypto as a hedging tool or an accepted payment method.

These risks have also been the driving force behind the increasing popularity of stablecoins like Tether, USD Coin, and Binance USD, as they offer crypto investors a safe haven in times of high volatility while also allowing non-crypto savvy individuals to benefit from them as a means of exchange.

With stablecoins becoming widely known to people around the world, a future where crypto and fiat can be used interchangeably seems to be imminent, and as such, projects designed to serve the needs of both markets need to be available when the time comes.

However, Stablecoins have also resulted in another issue for the crypto ecosystem in the form of Silos, creating interoperability issues and further fragmenting the market, which in turn makes the user experience worse for those who have to deal with it.

Public Mint is a platform aiming to act as a bridge that seamlessly connects both the crypto and fiat realm, creating a stable future that allows both economies to benefit from each other to create new use cases and advantages for their users.

Taking the Stablecoin Approach to Another Level

This ensures the stability of their value using the same principles behind most stablecoins with the added benefit of being fully compliant with regulations.

However, Public Mint is superior to Stablecoins in many regards due to its approach, which allows it to get rid of the silos that have emerged in the cryptocurrency ecosystem and have resulted in an increasing lack of interoperability.

Already in the Marketplace

The project has been live since July of 2020, facilitating the integration of crypto into the global economy and addressing several of the issues that prevent blockchain platforms from operating outside of the blockchain while allowing traditional businesses to access the blockchain ecosystem.

The team behind Public Mint thinks of decentralization as a spectrum, which allows them to move between centralized and decentralized systems taking the benefits of each of them and adding them into a single ecosystem.

Public Mint is built on a fiat-native blockchain, APIs, and an embeddable web widget, all of them widely accessible to the public to enable them to create fiat-based applications without the need for bank accounts, without the need for complex custody, or lack of compliance.

A Wide Array of Uses

The ecosystem uses an open-source Ethereum-compatible blockchain in which network fees are paid in fiat, improving usability by removing the steps required by the purchase of cryptocurrencies, as well as the fluctuation of underlying assets that results in price uncertainty.

By using Public Mint, users can obtain core banking transactionality without the hassle usually associated with traditional financial institutions, and enjoy the convenience of using CeFi for custody and regulation compliance while having the exchangeability of DeFi. 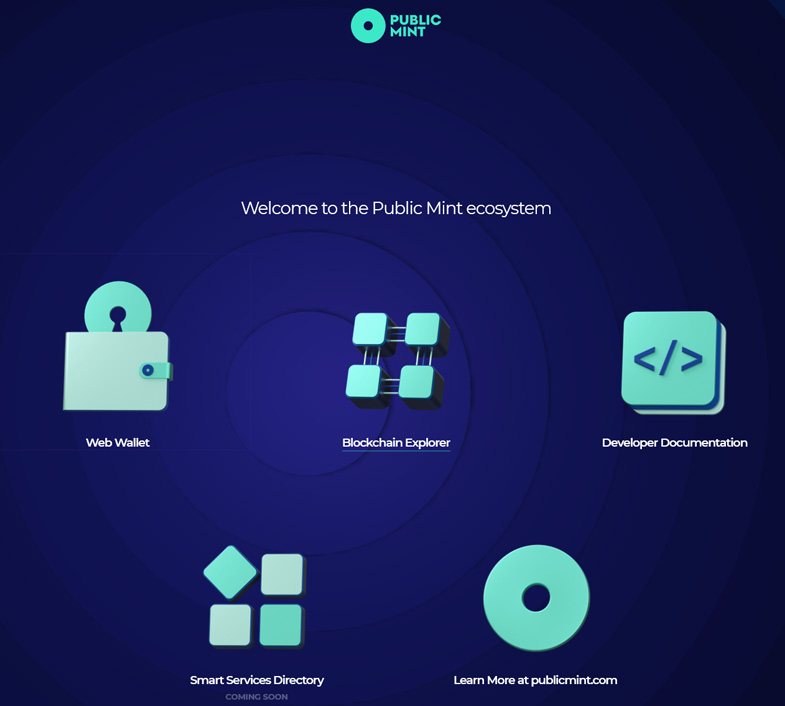 Public Mint is now launching its MINT Global Earn Program intending to bring Centralized and Decentralized finance to the masses by providing them with cheap and efficient instant transfers and payment settlement.

The addition of interest-bearing accounts to the ecosystem will allow Public Mint users to generate passive income by holding the token while reducing risks by distributing funds through various entities using legacy centralized finance and the innovation provided by DeFi.

Public Mint and MINT stakers will receive a share of the 15% of all the earnings generated by the platform, while the remaining 75% will go to those who have supplied USD or USDC to the platform and are participating in the Earn program.

Higher APYs will be possible as more CeFi and DeFi partnerships are reached by the platform, as well as adoption and support by the community continue to increase.

The program makes use of a mobile and web application that users can use to transfer, withdraw, deposit, and earning money, while also creating proposals and voting on them, Staking, and allocating their funds to different pools.

The Token Behind the Features

MINT is the utility token of the Public Mint ecosystem, where it acts as the digital representation of currencies backed by institutional liabilities to ensure their stability. This is the same principle behind synthetic fiat and the Central Bank Digital Currencies (CBDC) being considered by governments around the world.

By using MINT as a method of value exchange, Public Mint achieves the same functions as payment services like Paypal, as well as the SWIFT system, without requiring users to use a bank account.

MINT is not only essential to providing the ecosystem with its core functionality, but it also allows its holders to participate in the decision-making process of the platform by using decentralized governance. The token can also be staked to generate passive rewards in the form of USD Earn (USD+).

Not For Paying Gas Fees

It is also important to note that the MINT token is not used to pay for Gas in the Public Mint ecosystem, unlike other blockchain platforms that use their native tokens in this way.

The token was launched on February 26th via an Initial Dex Offering (IDO) on Polkastarter which saw an equivalent of $250k of MINT sold, with the posterior listing of the token in Uniswap.

One of the most important features of the MINT token is its compatibility with the Ethereum network and other platforms using ERC20 standards, despite not being an ERC20 itself. This allows Public Mint features to be integrated into Decentralized applications (Dapps) to provide them with fiat and crypto functionalities.

The functionality of the token can be added to a Dapp by adding about 10 lines of code to enable users to transfer funds between on-chain addresses and their bank accounts, opening the doors to new functionality and possibilities

While the decentralization of blockchain and cryptocurrencies has been one of its major selling points since its inception, it is usually confused with a lack of regulation being possible.

Decentralization indeed makes it more difficult for governments to regulate the industry, but as long as fiat is needed to acquire crypto, regulation is necessary.

The regulation also works as an incentive for those who doubt the safety of cryptocurrency to make the transition, as it ensured that governments have certain control and trust in the effectiveness of cryptocurrencies and the benefits they provide.

As Public Mint interacts with fully regulated financial institutions to provide its functionality, as well as being fully compliant with regulations relevant to the business, enterprises and private users can be sure of the value of the synthetic fiat they are operating with and the lack of legal irregularities.

This is even more important due to no transaction in Public Mint ever actually using fiat currency for the processing, which is possible due to its reliance on regulated custodial partners.

NFTs Continue to Soar as Bansk..

This is why all companies should buy Bitcoin, says Square’s CFO